Eddie Izzard does a great comedy sketch about flags and how the British colonized the world by planting their flag in other countries regardless of who was there first. It's actually hilarious (and sadly a little bit true).  But people through all recorded time have used symbols to identify themselves as groups and as individuals. Think about your own life. Do you support a sports team,? Go Flames! lol Because they brand colours and logos. Does you family have a distinct name or clan affiliation? How about identifying yourself based on your occupation, religion, or hobby? We all do things that bring us together in small groups and communities and we represent our membership with flags or other colourful things. Even us farmers get in on the act with our Dickies and John Deere green ball caps. lol

If you're part of a minority group then having a symbol to rally around can be community strengthening. Like the gay pride rainbow flag we're all familiar with. Cross Dressers and the trans community uses a few different ones. The most common are the pink, blue, white flag which I love because it hangs the right way no matter which way up you put it :)  and the trans Israel symbol showing the combination of the male and female symbols. Very cool and well thought out.

Personally though I think the symbol should be a dragonfly. And not just because I have an awesome dragonfly henna tattoo right now. Dragonflies are sort of my thing. So much so that in addition to selling fruits and veggies we also make and sell swarovski crystal dragonfly sun catchers. Let me tell you the story behind these unique crystal creations.

The Dragonfly is a very simple yet symbolic and mystical creature, epitomizing the ever changing world around us. Starting its life under water as a humble beetle and then scrambling out of its watery beginnings to transform into a beautiful creature that swoops and glides through the air on the frailest transparent wings that glow with ever-changing color in the sunlight. Not unlike the struggles that face each one of us every day. 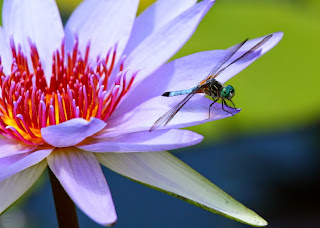 I see many of my CD and trans friends are like this too. After lots of struggle they absolutely bloom in their new found freedom of self expression. I wish society could see how amazing they are. Instead society wants everyone to be butterflies, eating and consuming then lying around before coming out with shiny wings that flop all over the place when they fly. Don't get me wrong butterflies are ok, but the Dragonfly is awesome.

On a personal note, we're doing ok. Rachael is away for work right now and will be home tonight. It'll give us a chance to get some chores done and to talk about her observations from the CD Club meeting she went to this past Monday. Chatting online is one thing but actually talking face to face is another. You communicate so many things non-verbally. I've noticed that with people who cross dress or cross act, that there's a definite level of comfort and openness in those who are fully dressed and acting as their femme selves. They tend to be more open, modulate their voices and even blink more. Small things but they make passing easier and it seems to me that communication is better too.

A couple of months ago I was at the dentist with one of the girls and sat opposite a nice trans lady who was very uncomfortable being there it seemed. She was waiting for her daughter. I saw her again today in Walmart so she must be local. I wonder if she is actually trans or CD. I mean I'm not exactly going to ask and it's none of my business. But like my friend Emma, (I'll just call her Emm for short if that's ok) I wish there was a way of being able to recognize each other out in public and to be recognized.  This lady has a mix of feminine attributes and masculine, I've only had the opportunity to observe closely because we had that time in the dentist waiting room. I wonder how many others I'm missing.  Maybe we need a secret phrase or handshake after all Emm!

I feel a bit stuck between two worlds at the moment. On the one hand I have the church, right wing conservative, community volunteer, family raising side of my life and on the other is this amazing sub-culture that almost feels like a guilty pleasure. It's a hard balancing act. Is this how cross dressers feel? Caught between two worlds?
Posted by Unknown at 07:17

Blogs and Things I Love